Last Wednesday I was honored to be the guest tutorial author on Split Coast Stampers (SCS).  I was so thrilled when Beate said she wanted to feature my tutorial for making a Lever Card. It was my first time EVER and gee, how exciting!

I've seen a good many of these cards on Pinterest and various blogs, but it seems almost all of them are cut using a program on their Silhouette machine.  Since I don't have that machine, I wanted to figure out how to make a lever card without the program, just cutting it myself.  I did find one blog that gave a pattern to use, but again, I wanted to figure out the "math" of it.  My stamping friends kid me about this (**Hi, Janet**) because I'm not into "patterns" for cards, but "the math" of measuring them myself.  If you want the complete tutorial, you can go HERE to see the complete tutorial on SCS.  Today I'll just share the pictures of the cards I've made using the Lever tutorial.

This first one is the one I showed in my tutorial.  I chose it because of its brightly-colored card stock and designer paper. 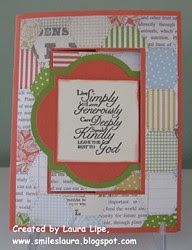 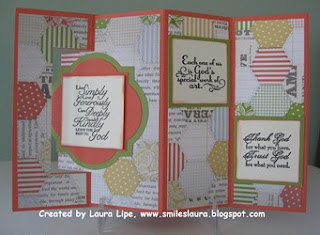 This card uses the stamp set Storybook Friends and Happy Hour.  Love this one!! 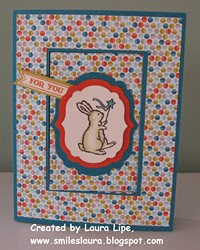 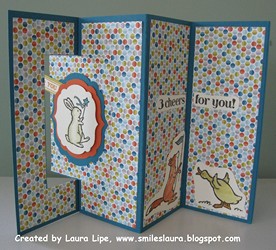 This one uses the Oh, Whale! set and well, you've seen how much I use that set and these colors and this designer paper.  LOVE it!! 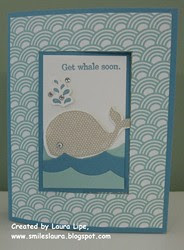 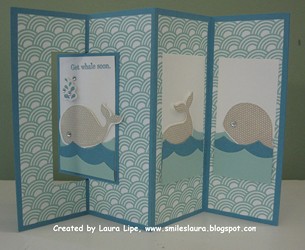 This sample uses the Need for Speed and Daring Adventure sets.  I'm SOOOO going to miss Need for Speed when it retires at the end of the month.  I love this set for making cards for my husband! 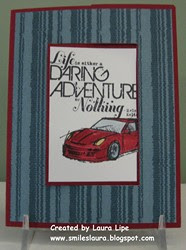 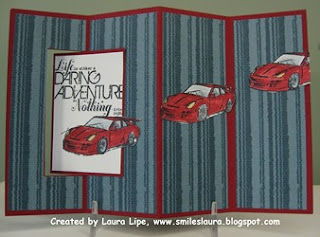 The car is supposed to look like it's zooming to the front of the card.  Hubby says it looks like a Nascar race, so the cars should be different colors.  Whatever....

OK, sometimes I don't post too often, but today you got 4 cards in one post, so I hope this makes up for absent days.  I just wanted to show them all to you at once.  And be sure to log into SCS to get the tutorial for this level card.  It takes a bit of precision in cutting to get the lever to work properly through the card front's window, but you can do it!!  Have fun and email me your samples or upload them to SCS's gallery.

Thanks for coming by today.
Smiles, Laura

I appreciate all comments you leave. If acceptable, they will be posted to by blog.

Laura Lipe, Pisgah Forest, NC
I am a crafter who loves to stamp and create beautiful paper crafts.I am a Stampin' Up! demonstrator. Other hobbies include or have included quilting, photography, beading, flower arranging, and...well, you get the pictures---I just love crafts. I am a wife, sister, daughter, mother, grandmother, friend, volunteer at my church, and a child of God. One of the brightest spots in my days is my little Schnauzer dog Gabby. Right now, I am also a cancer fighter and I am determined to be a cancer conqueror. Never liked the term "cancer survivor." I'll be a cancer conqueror! Contact me at lipe2@citcom.net.

All content (photographs, designs, content, text, concepts) (expressed, implied) are copyright Laura Lipe. I respectfully ask that you respect this copyright and not use my artwork for publications, design contests, etc. Feel free to use these designs for your own personal use. My work is here to inspire you to your own creativity. Thank you for your integrity concerning this.

This is my personal blog. I am an independent Stampin' Up! demonstrator, and I am solely responsible for the content of this blog. Stampin' Up! does not endorse the use or contents of the classes, services, or non-Stampin' Up! products I may use. Anything on this blog related to my Stampin' Up! is my own offerings, through my efforts and available only through me. As an "independent" demonstrator, I am able to offer a wide range of techniques, stamping expertise, and services.

How many times has my blog been visited?